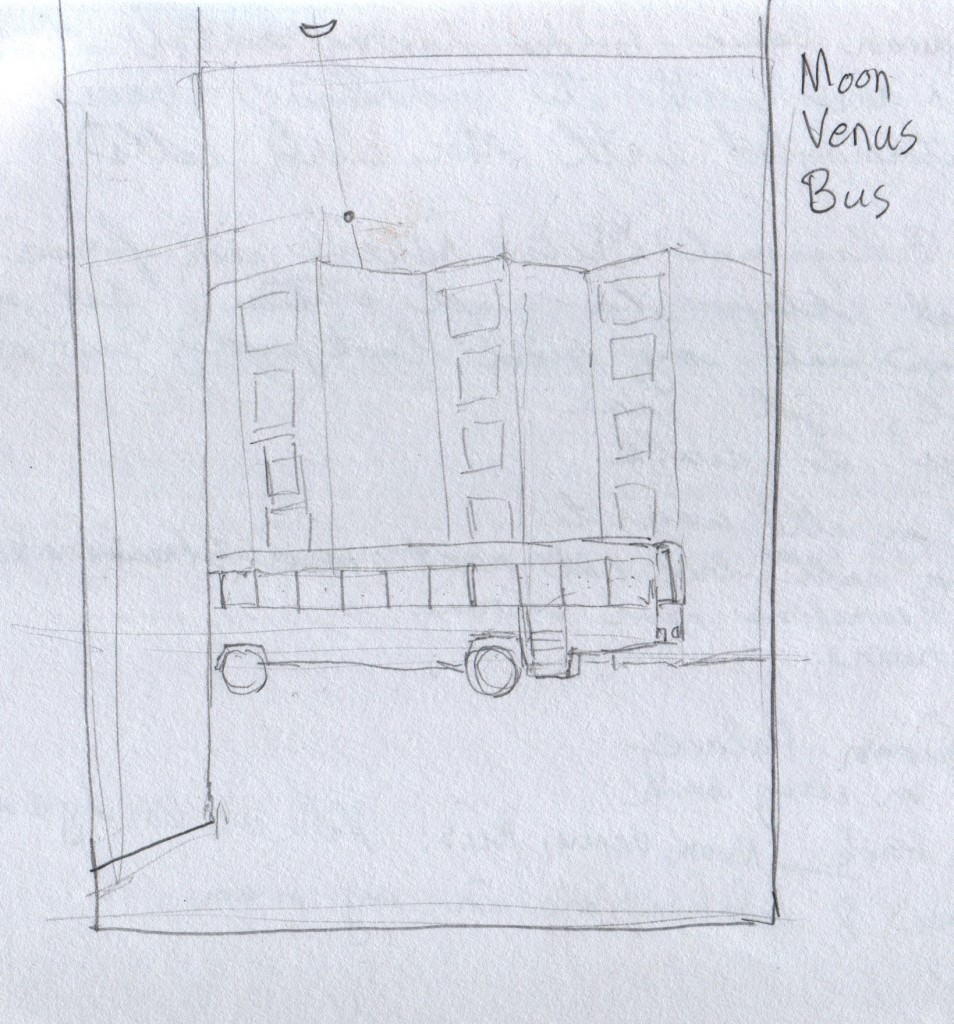 After sundown, upon my return from my first visit to Krishnapuram Palace, I saw the Moon and Venus in the sky over the bus depot in Alappuzha.
Another name for this town is Alleppey. The Malayalam name is ആലപ്പുഴ (Alappuzha). 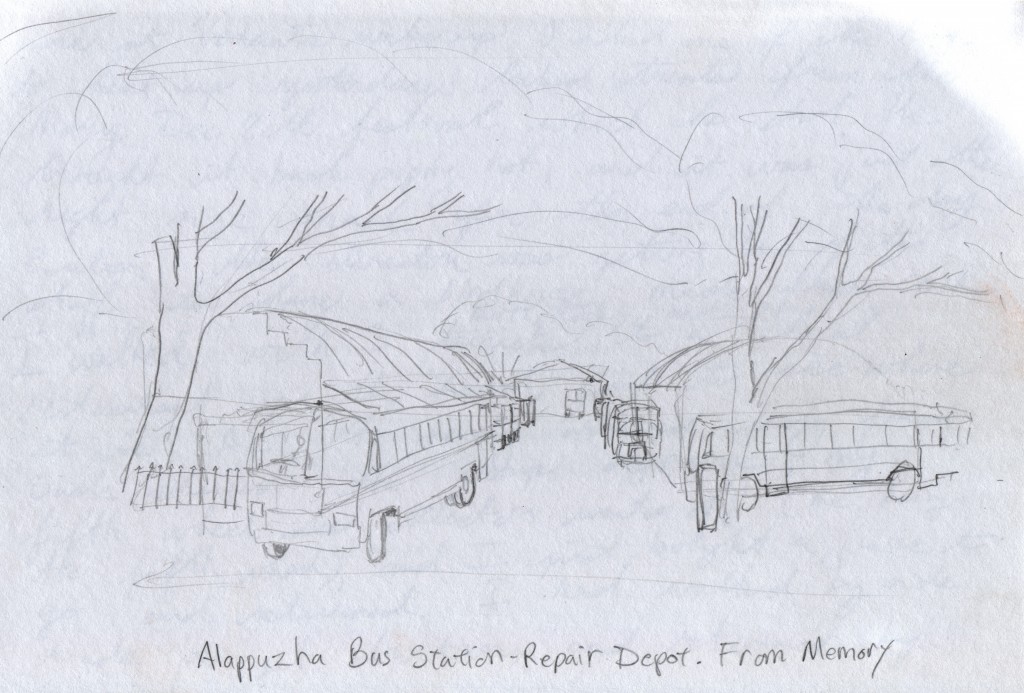 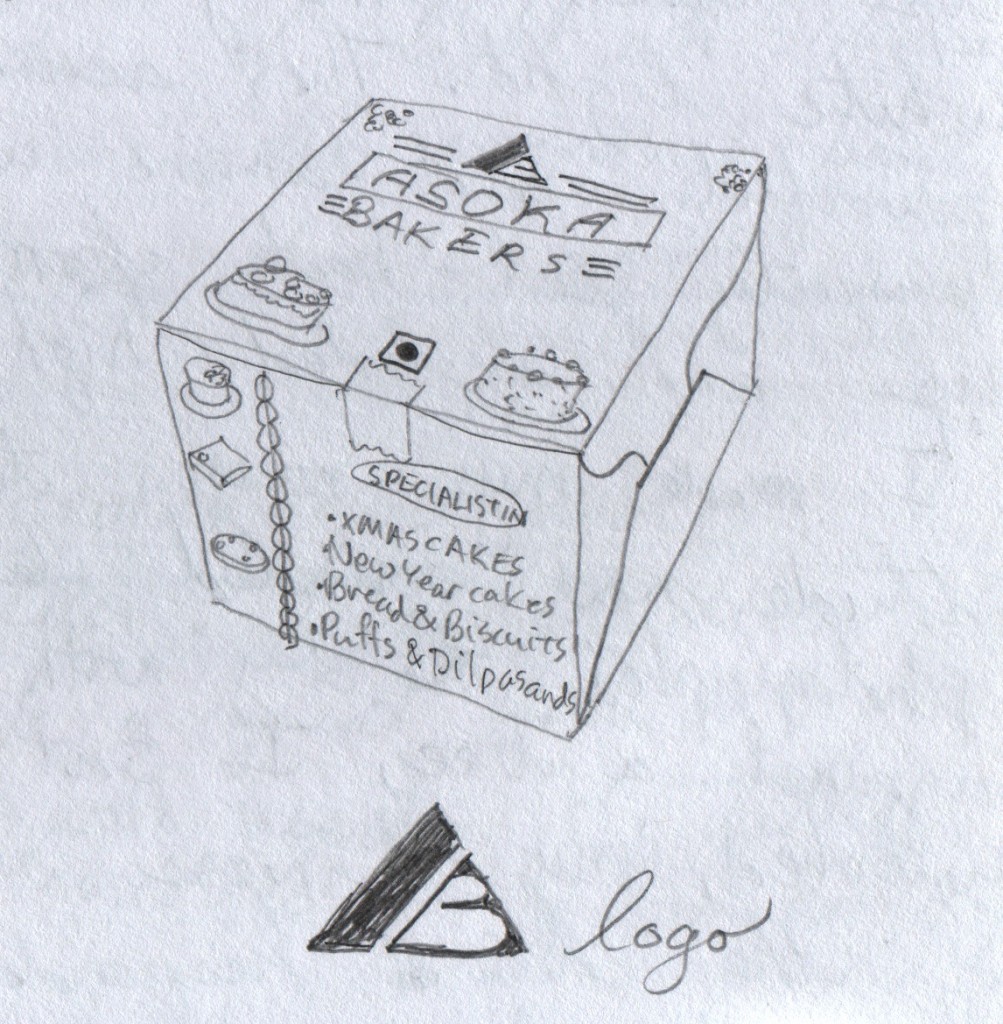 Someone handed out boxes of pastries during the public celebration of the Feast of the Immaculate Conception. Fireworks and processions accompanied the celebration through the evening. 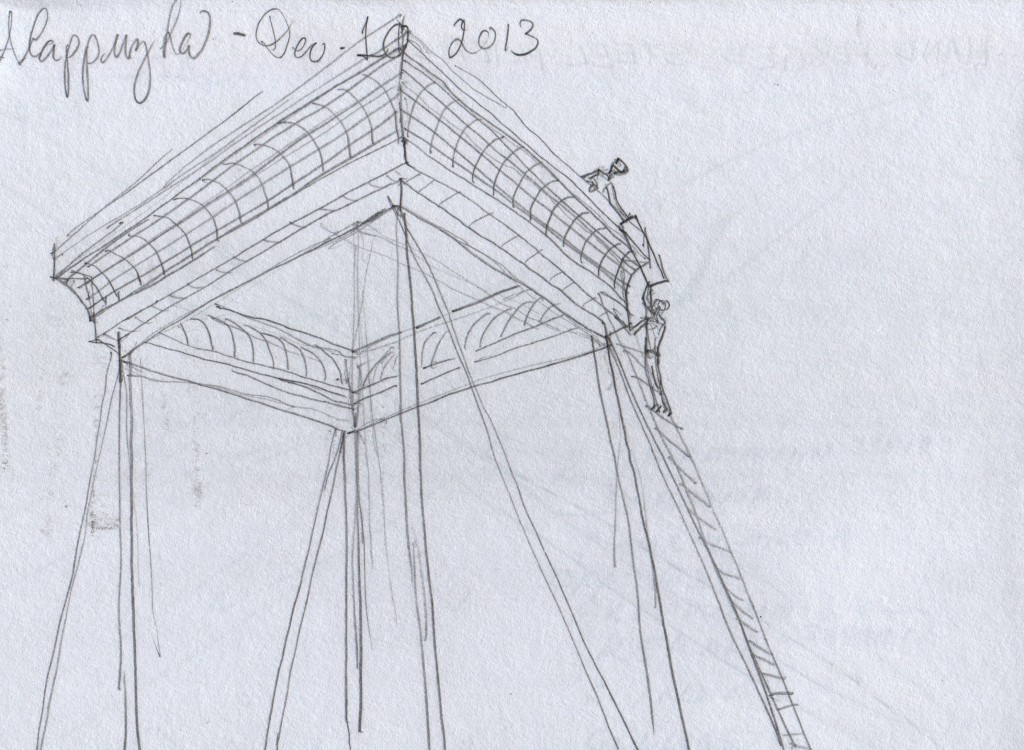 A festival structure under construction in Alappuzha. The poles straddle a main street, so the structure forms a kind of gateway through which the traffic flows.
The structure is lightweight, made of wooden poles and bamboo strips. The bamboo strips are prefabricated into panels, which the workers carry up the ladder.
I thought that it was an attractive structure, and I had no idea that it was just the beginning of a tower. 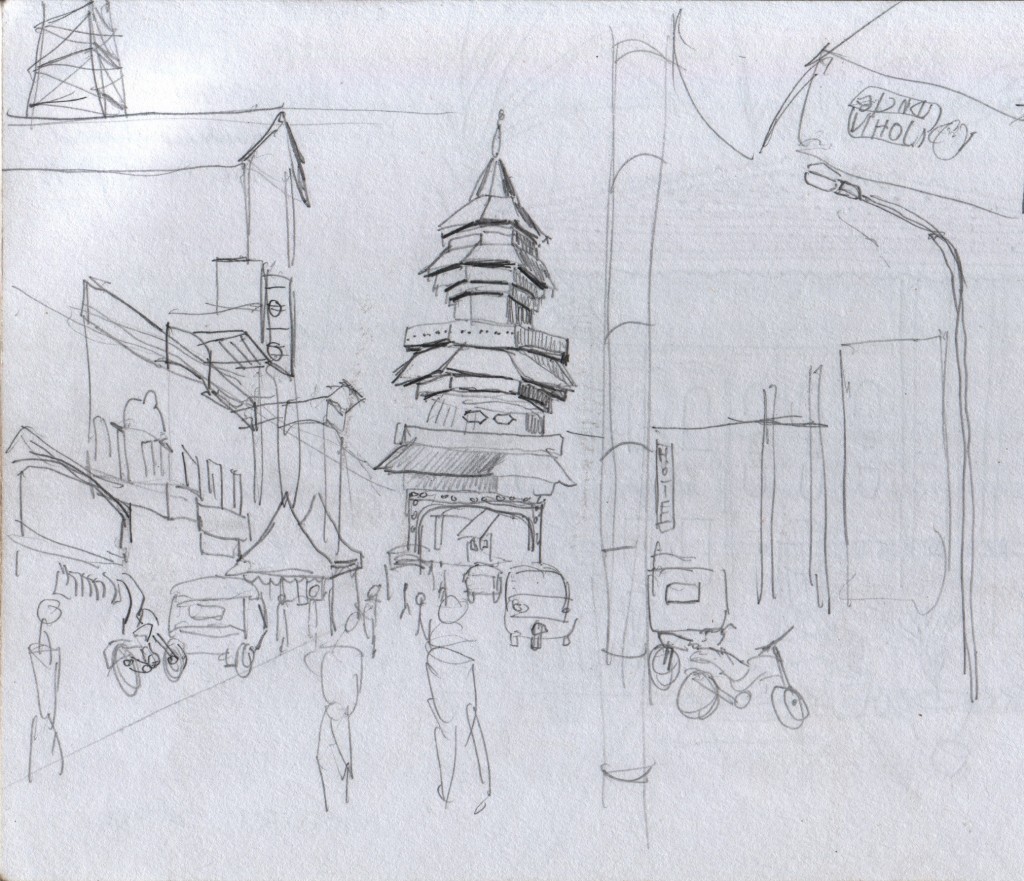 A few days after I sketched a festive bamboo structure that was taking form on a downtown street, I was astonished to see that it had become an edifice towering over the surrounding buildings.
At night, the tower glowed with strings of coloured lights that covered every square metre.
This decoration is part of an annual festival. The residents dressed up the town, lining the streets with rows of poles that carry silver streamers. The streamers enclosed the street in a tunnel of shimmering silver that whispered in the breeze.

Roadside stands have iron juice presses to make juice on demand. The press stands on a portable table, and often a diesel engine, sometimes an electric motor, on a lower shelf drives the press via a belt.
When a customer orders a glass of sugar cane juice, the vendor takes a six-foot long peeled cane out of the inventory of canes leaning against a nearby wall, and feeds the cane through the rollers. The vendor folds the now crushed cane into a more and more compact bundle before each successive trip through the rollers, extracting as much juice as possible. The juice flows down a chute, through a sieve, and then the vendor pours the juice into a glass. Roadside stands use tumblers made from glass, so there is no litter.
Sometimes a passing cow will browse on the pile of crushed cane pulp. In any case, someone finds a use for the pulp.
I drank this juice a few times. It is not overly sweet as my preconceptions of “sugar” cane had led me to expect. This juice is reputed to be a satisfying thirst quencher in hot weather.
I sketched this one in Alappuzha, though I saw these juice presses wherever I went. 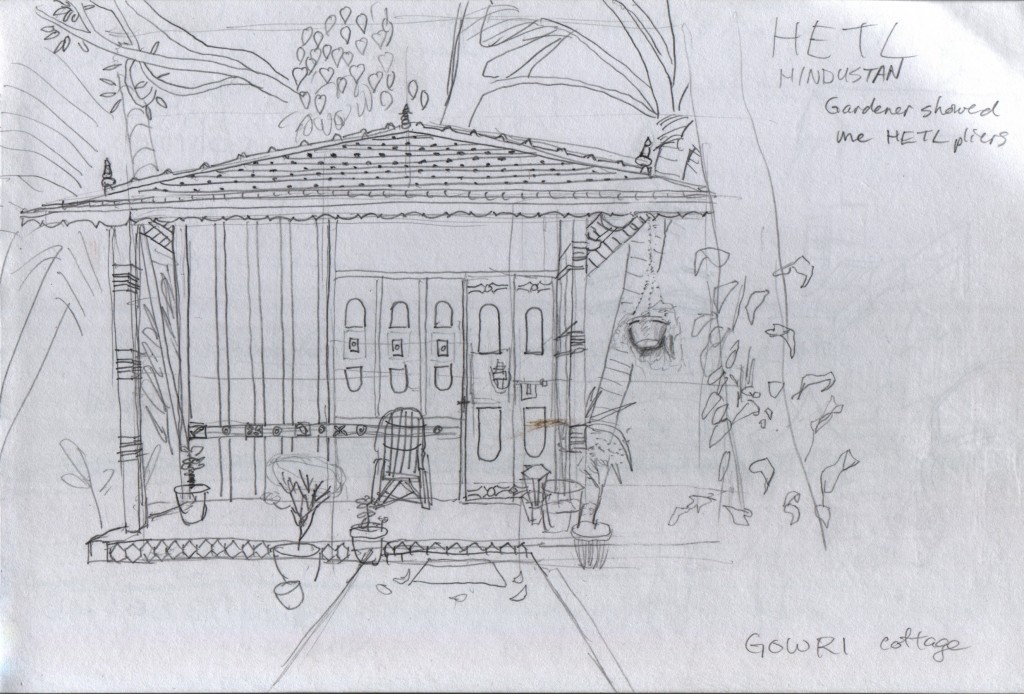 After previously booked reservations meant that I had to leave one lovely and secluded hostel, I moved to Gowri Residence in the centre of Alappuzha. The staff offered me this cottage, and I moved in for a few days.
One of my interests on this trip was hand tools. The gardener let me see his HETL pliers, made by the same company that manufactures the elusive Whitworth sockets that I was trying to find. 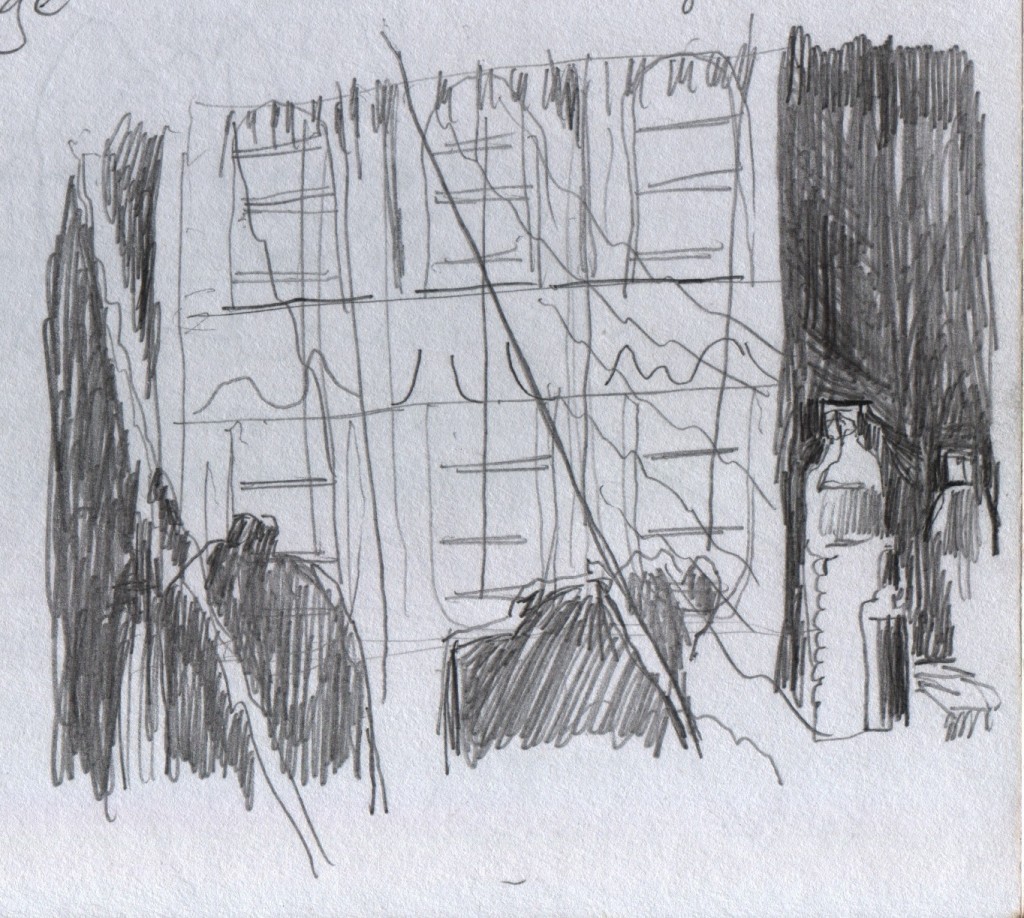 Morning view from my bed, through the mosquito net, to the window in the cottage where I stayed in Alappuzha.
This was the first time during my trip that I slept under a mosquito net. I found it comforting and cozy. I felt protected in there. In my mind it took me back to childhood, making tents with blankets and furniture.
Other times on the trip I relied on mosquito repellent, a different remedy altogether, and if I missed a spot on my ankle, for example, I woke up with bites there. 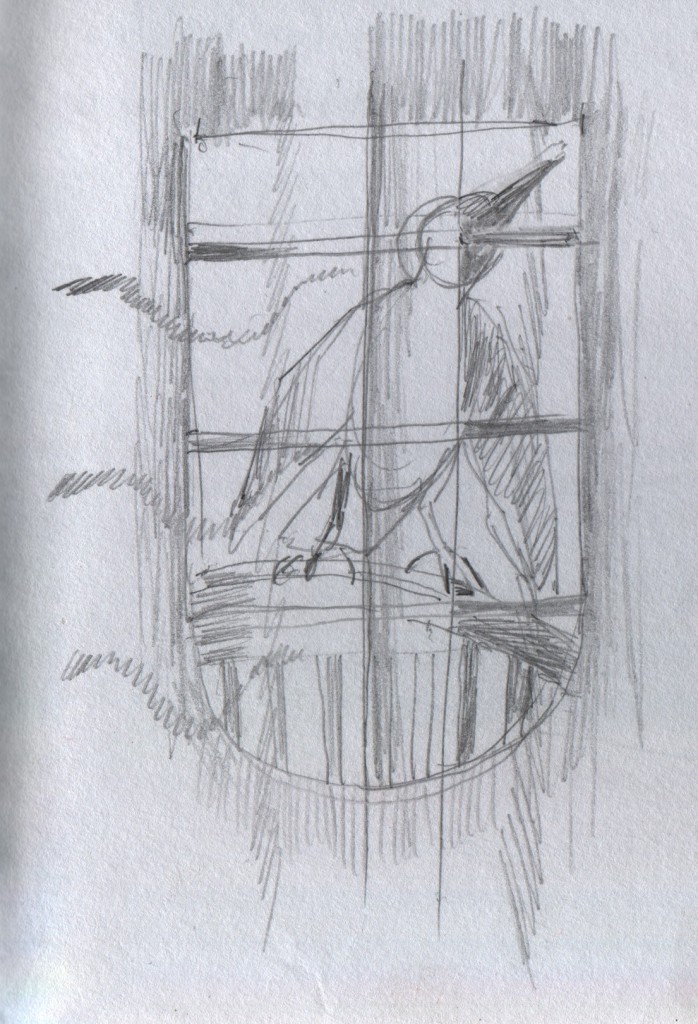 One morning a crow perched on a rattan chair on the porch outside the window and tapped its beak loudly on the glass. I viewed the crow’s antics through the mosquito net that enclosed my bed. 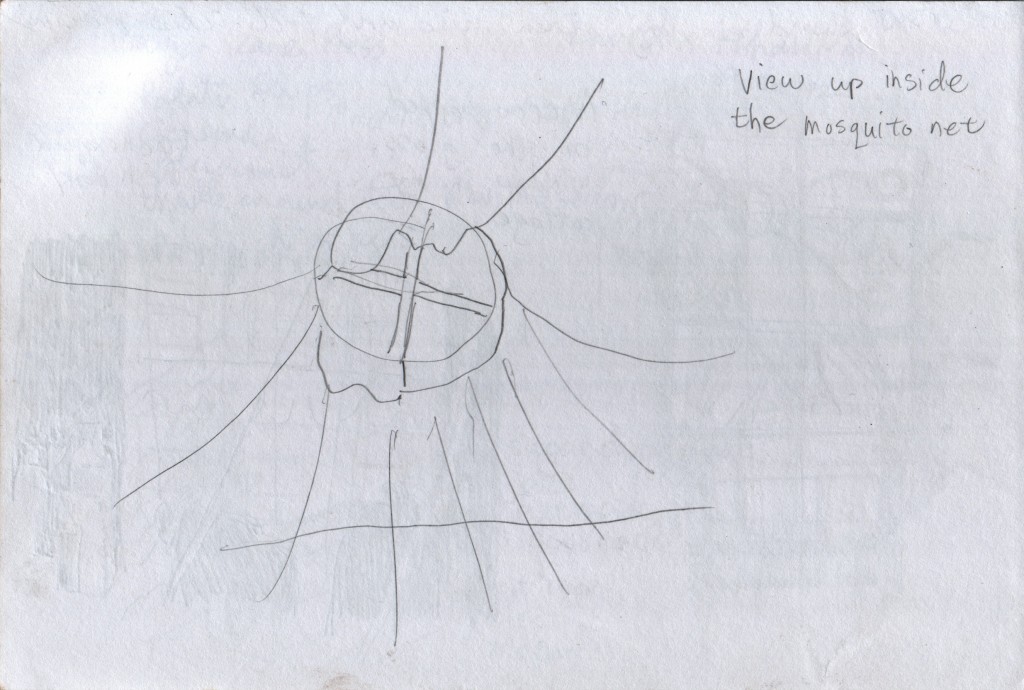 In Alappuzha, I slept under a mosquito net that was installed in the cottage. The fine mesh hung from a ring over the bed and created a cozy tent that completely enclosed the bed.
This was a relief from my heretofore nightly ritual of spraying myself and my clothes with mosquito repellent, or applying mosquito repellent cream.
The mesh provided a physical barrier against mosquitoes and an unexpectedly potent, psychologically comforting enclosure. I fell asleep with glee.

A vendor on one of the market streets in Alappuzha stocked these small-bowl hand-forged spoons. They appear to be forged from about 1/4″ round steel stock. I asked around, but did not find out their intended purpose. 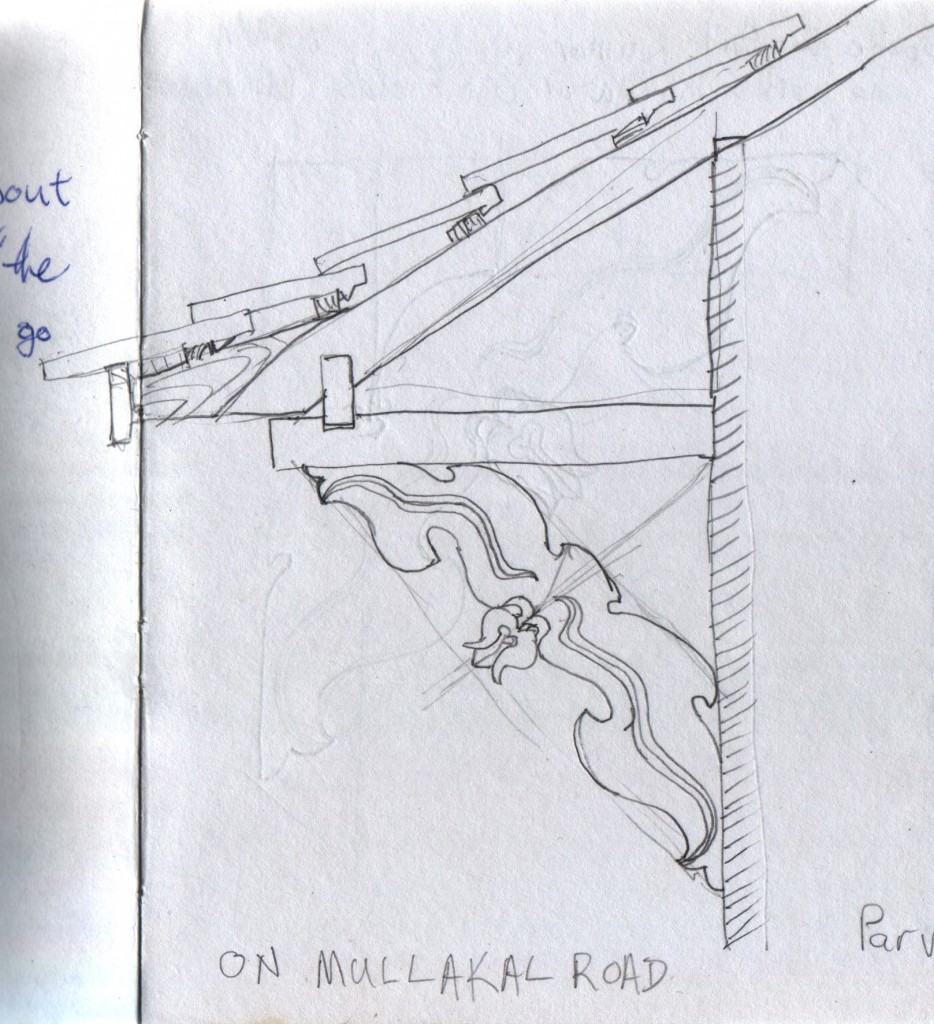 I made several attempts to sketch these carved roof supports on Mullackal Road in Alappuzha. The proportions were key to the feeling of the carvings. 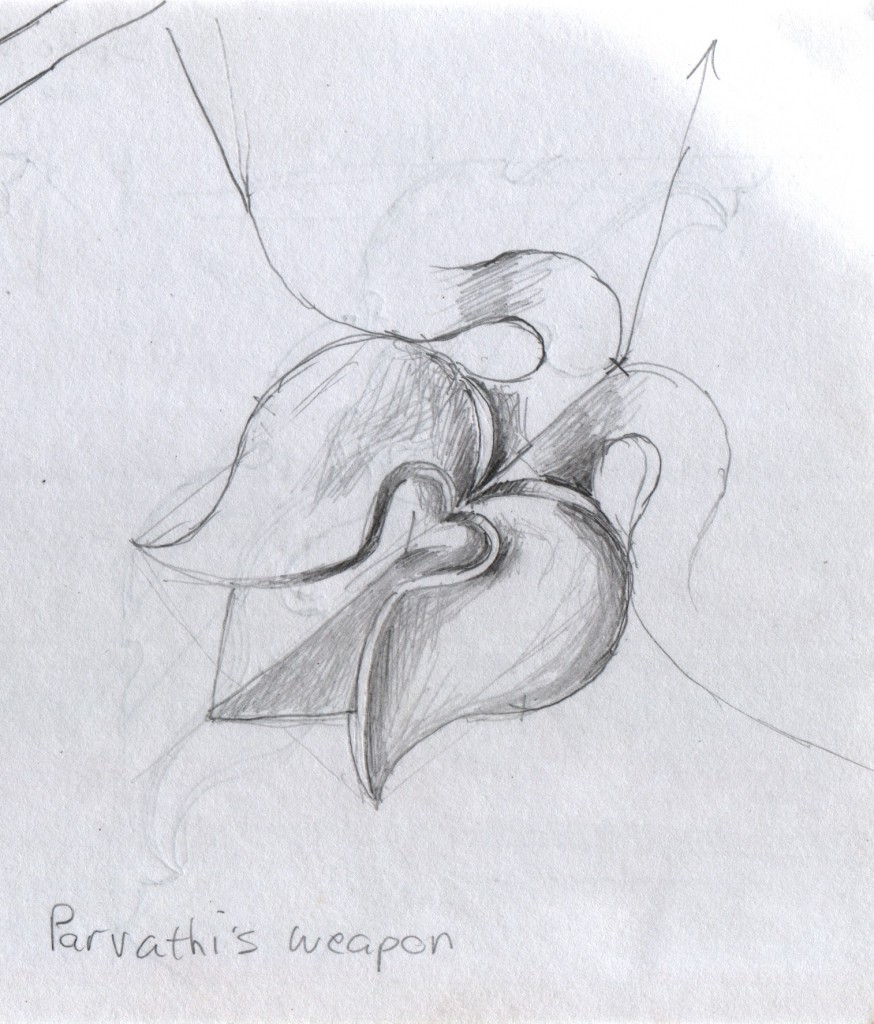 A close-up of the centrepiece of the carved roof support on Mullackal Road shops. I thought that the design was a stylized flower, but a passer by told me that it is Parvathi‘s weapon, a trident. 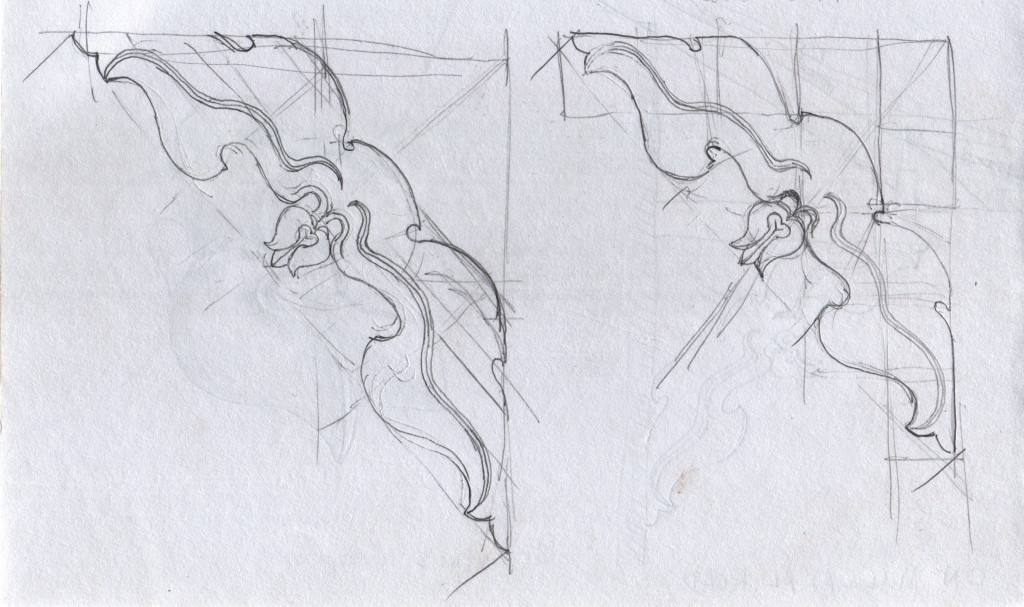 More of my attempts to sketch the proportions just right. The original designers had a method for composing this carving, and I tried to discover the logic behind the layout. 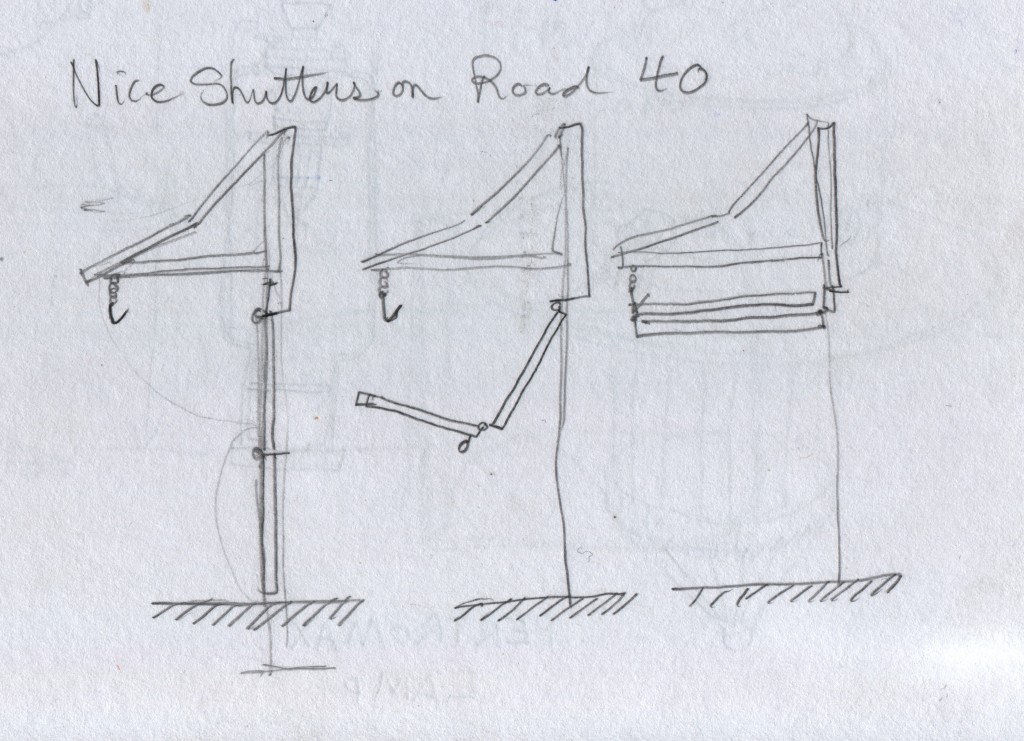 These vintage wooden shutters completely close the shop front, and fold to store overhead under the awning when open.
The shutters extend the length of a long building facing one of the main roads, each set securing the front of a separate shop. The building appears old, with finely carved architectural details.

I like these solid wood shutters on Mullackal Road in Alappuzha. These shutters, when closed, form the complete front wall of the shops. When opened, they fold in half and stow away overhead under the overhanging roof. 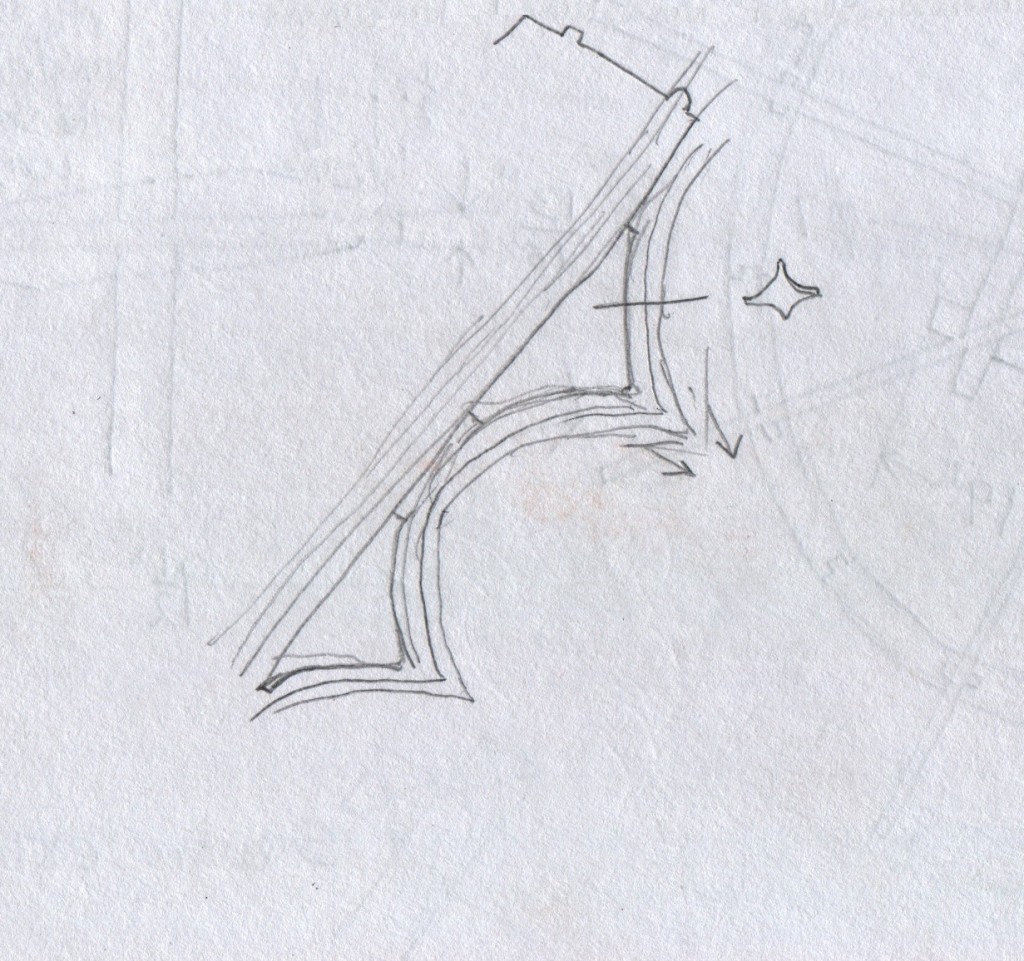 This curved open woodwork adorns a gable roof fronting on Mulackal Road in Alappuzha. The open spaces create an airy design. The cross section of the tracery is itself hollowed, further lightening the ornament. 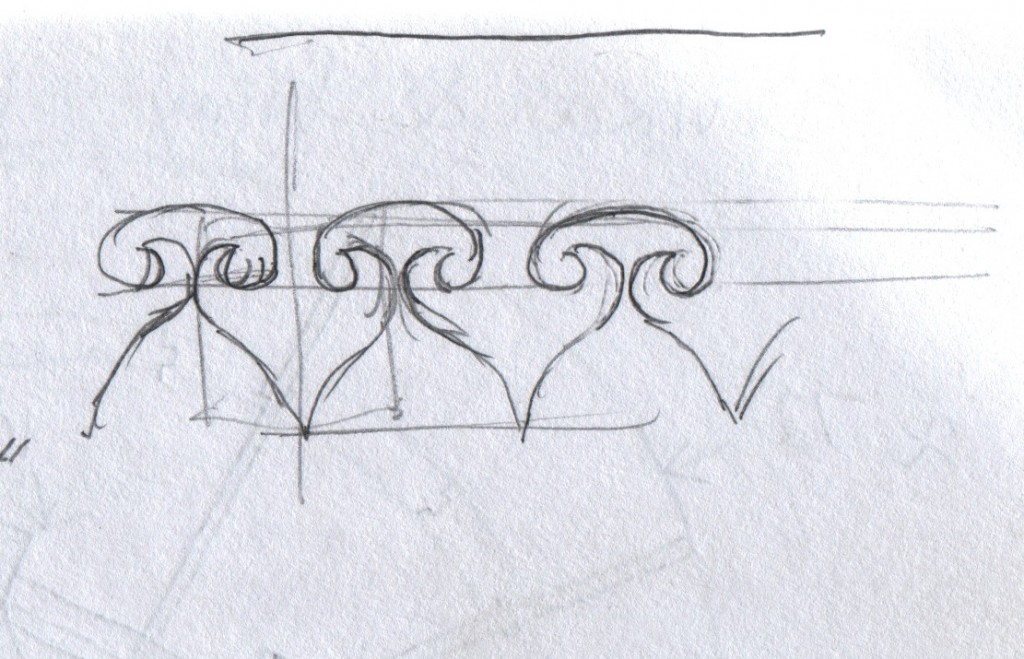 I think that this carved wooden fringe on the fascia of a Mulackal Road building achieves well-balanced notan. The spaces between the darts are as strong a shape as the darts themselves.
My design teacher taught that well-done notan can control the timing of how long the viewer perceives one shape before the viewer’s visual system flips the perception to the complementary shape: in this case, darts, spaces, darts, spaces and so on. The designer can have one shape predominate, or the viewer’s awareness can dwell equally long on each shape as they alternate, creating a rhythm while one looks at the design. 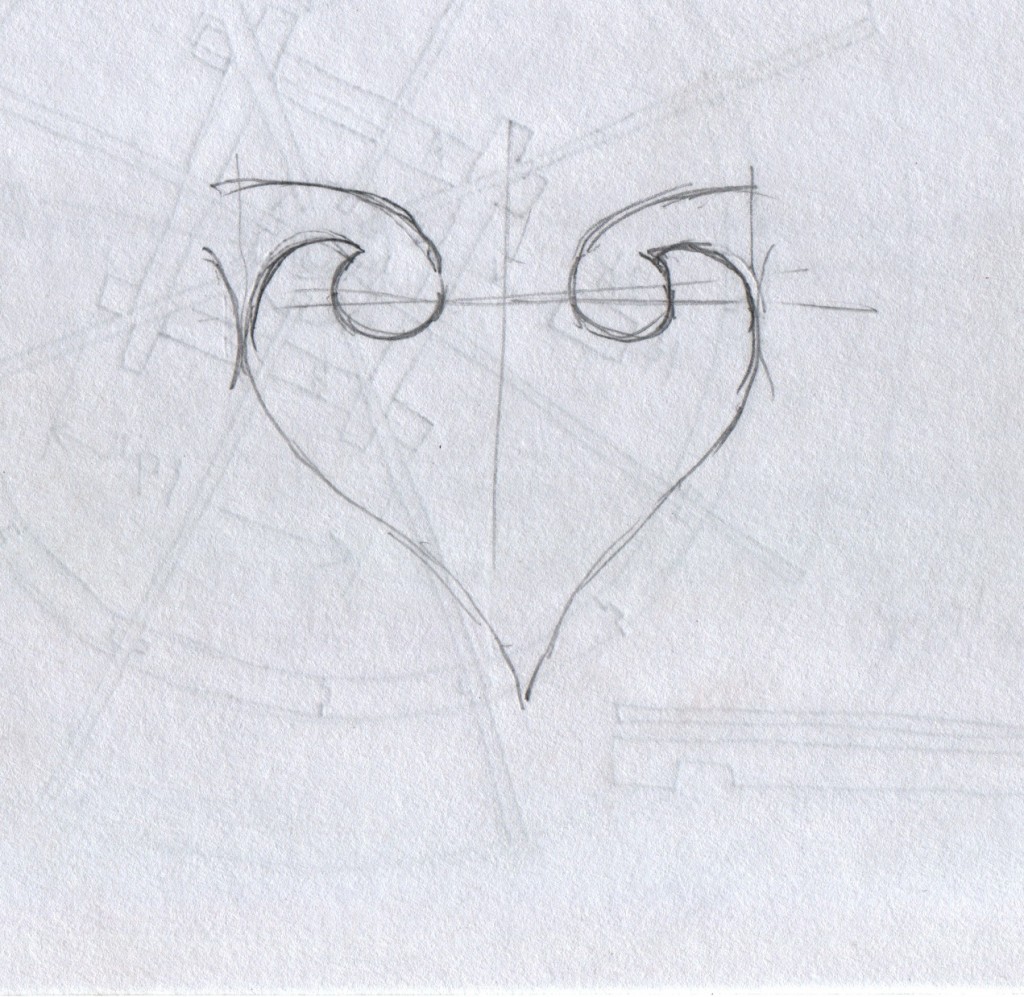 In this sketch I tried to faithfully draw the shape of the fret-sawn darts that decorate the fascia of a building on Mulackal Road in Alappuzha.
The darts, placed as they are in a row, form strong spaces between them, which creates notan. I like the Japanese term “notan” more than the English “figure-and-ground“, because the Japanese term is applied to aesthetic concerns. On the other hand, figure-and-ground is a broader, and technical, psychological term, and does not roll off the tongue. 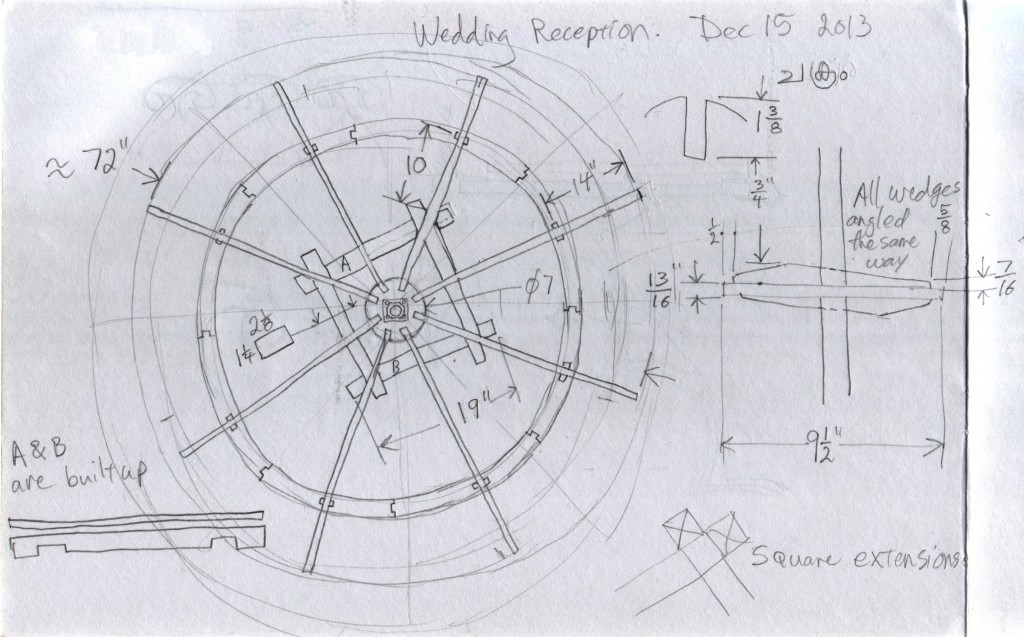 Farmers once commonly used this type of wooden paddle wheel to move water in irrigation ditches. The field workers pushed with their feet on the paddles to turn these wheels.
The joinery in this wheel is superb. All joints interlock mechanically, like three-dimensional puzzle pieces. The carpenter made the joints to high precision.
This example, in admirably good condition, is mounted on display in Gowri Residence. I estimated the dimensions.
On a visit to the countryside I saw decaying remnants of such a wheel on someone’s homestead.
The Malayalam word for such a wheel is ജലചക്രം (Jalachakram). 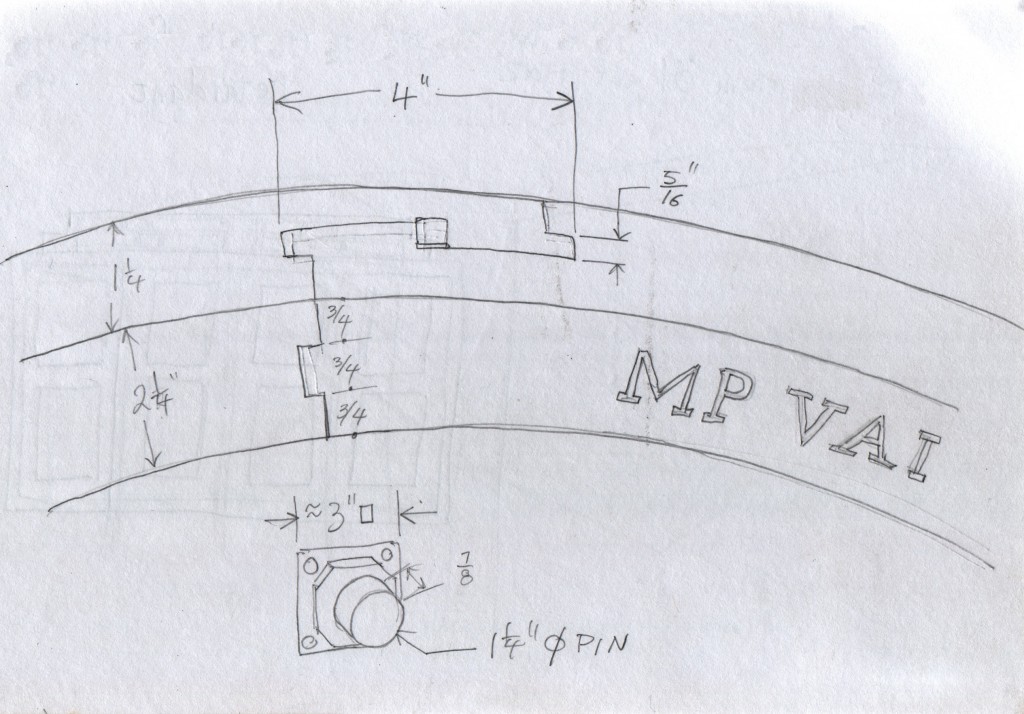 This close-up sketch shows how the joints on the paddle wheel’s ring were made. After the ring segments have been fitted together, a square wooden key slides down the centre of the joint to lock the parts in place.
“MP VAI” is precisely carved into the wooden ring. Is this the maker’s name, or the owner’s name?
Below that is a sketch of the steel or iron boss that forms the pin on which the paddle wheel turns.
Years ago I had leafed through a book on Japanese joinery, illustrating such locking connections. At the time I had marvelled at the precision and ingenuity required for such joints, and thought that it seemed scarcely possible that someone could execute such work. I had until now never seen such joinery in an actual object.
This paddle wheel is on display at Gowri Residence in Alappuzha.
The Malayalam word for such a wheel is ജലചക്രം (Jalachakram). 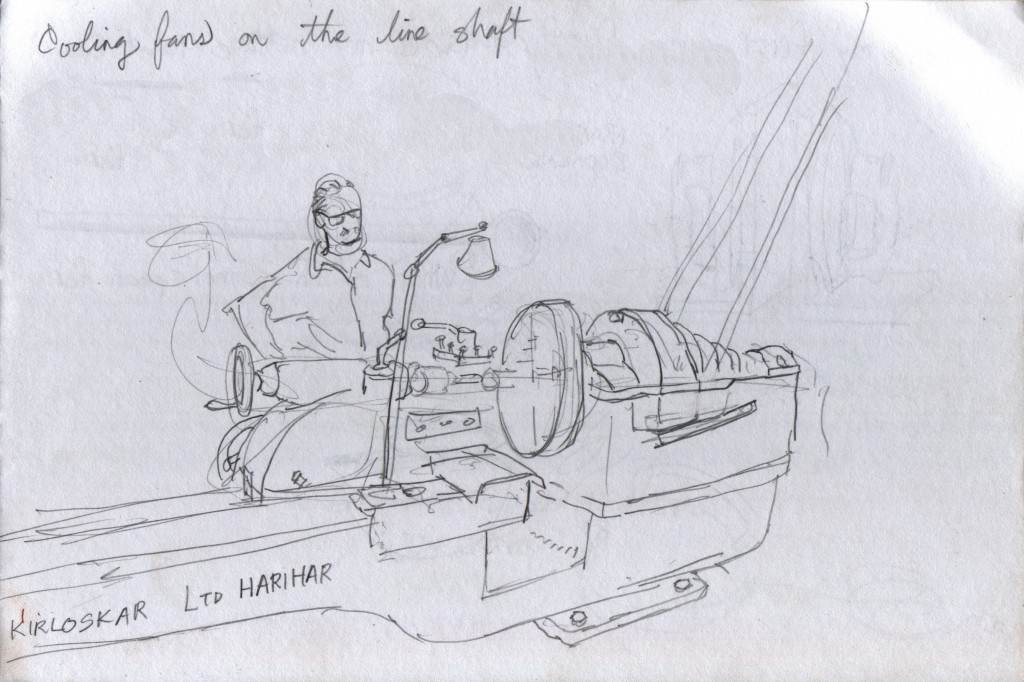 I paused outside a machine shop to see some of the boat parts that they were repairing. The proprietor, when he learned that I like to draw, asked me to draw him working at his lathe. I was honoured and delighted to do so.
A single electric motor powers two lathes via a line shaft. In addition, two ceiling fans get their power from the line shaft. Each fan is angled toward the lathe operator, cooling him with a breeze while he works.
The lathe is a domestically produced model, by the company Kirloskar.