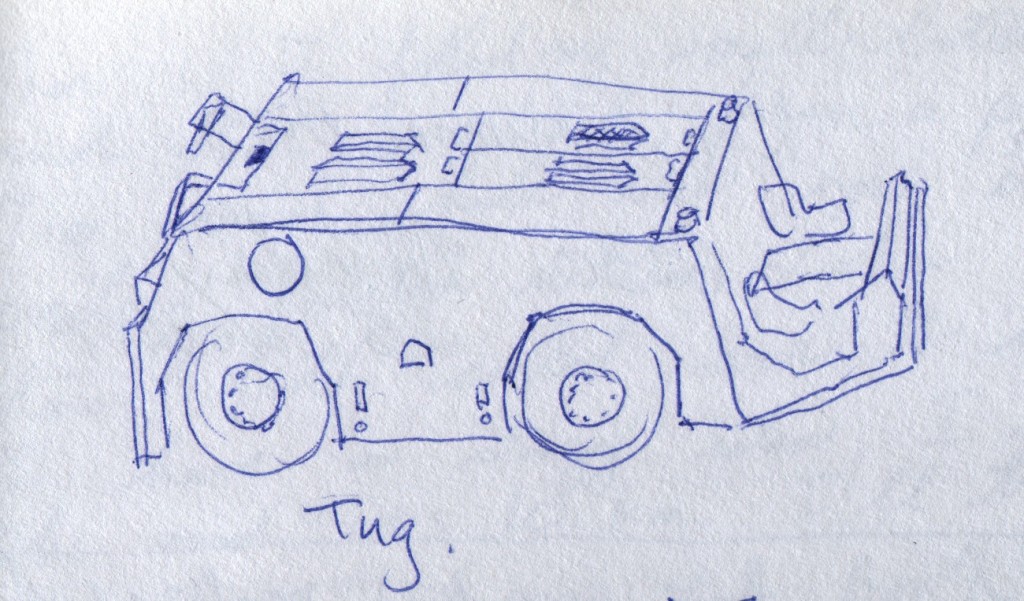 The open cab on this tug at Thiruvananthapuram Airport suggested to me that Kerala’s climate is different from Vancouver’s climate. 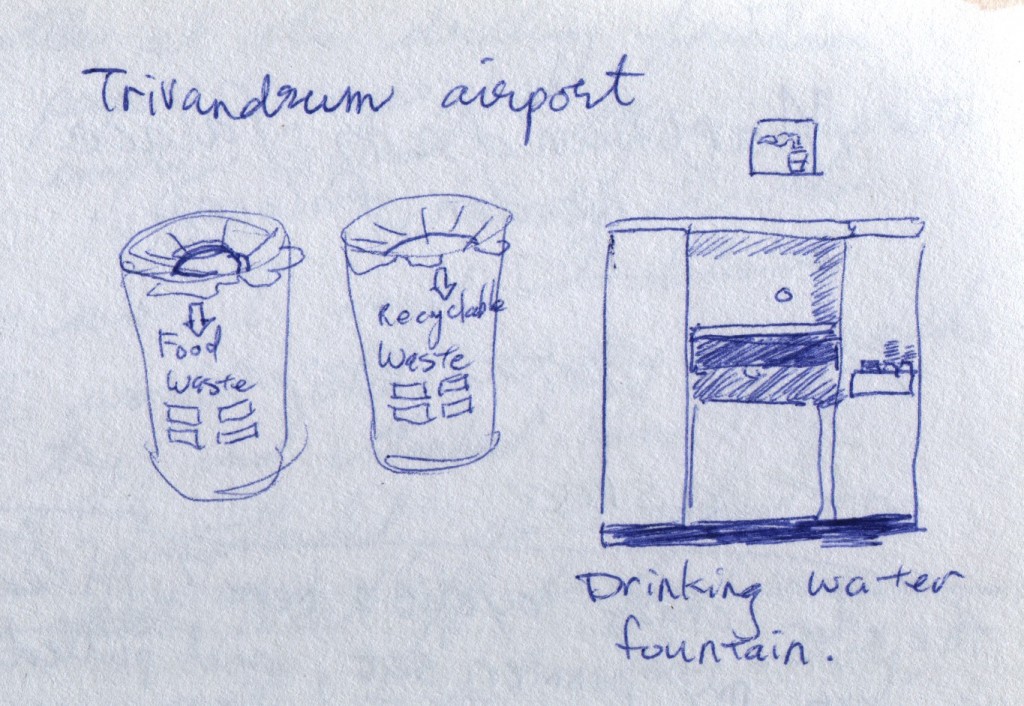 When I saw the recycling bins, I saw them as expressing values shared between Thiruvananthapuram and Vancouver.
The airport arrival hall has a drinking fountain with filtered water free of charge. 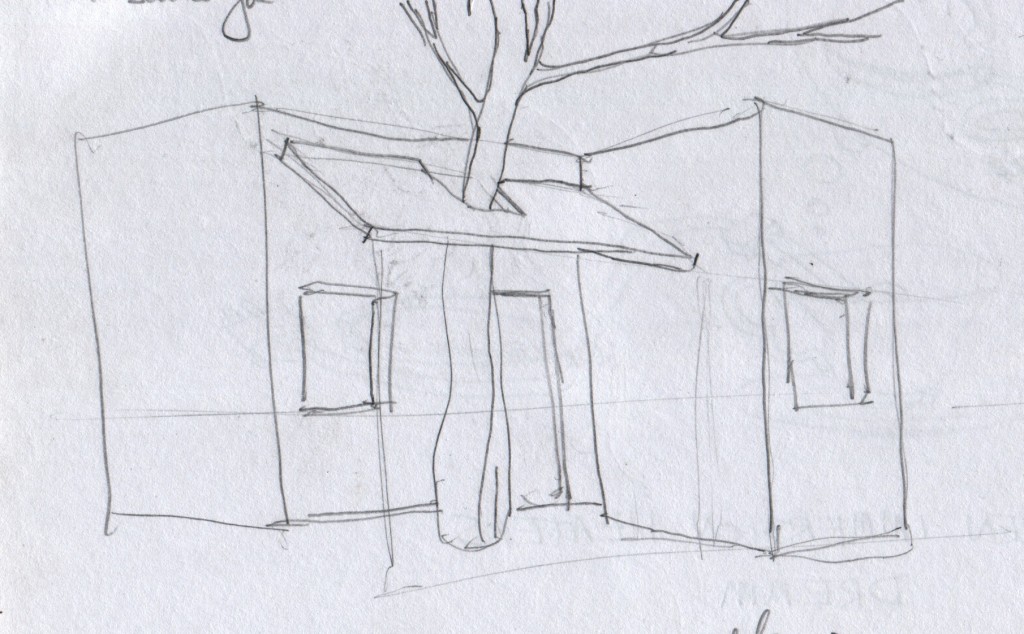 On my walk from Thiruvananthapuram’s airport into downtown Thiruvananthapuram, I passed by a house that had an opening built in to its awning to accommodate a pre-existing tree.
It made an impression on me, and only weeks later did I jot down a sketch of how I remembered it. 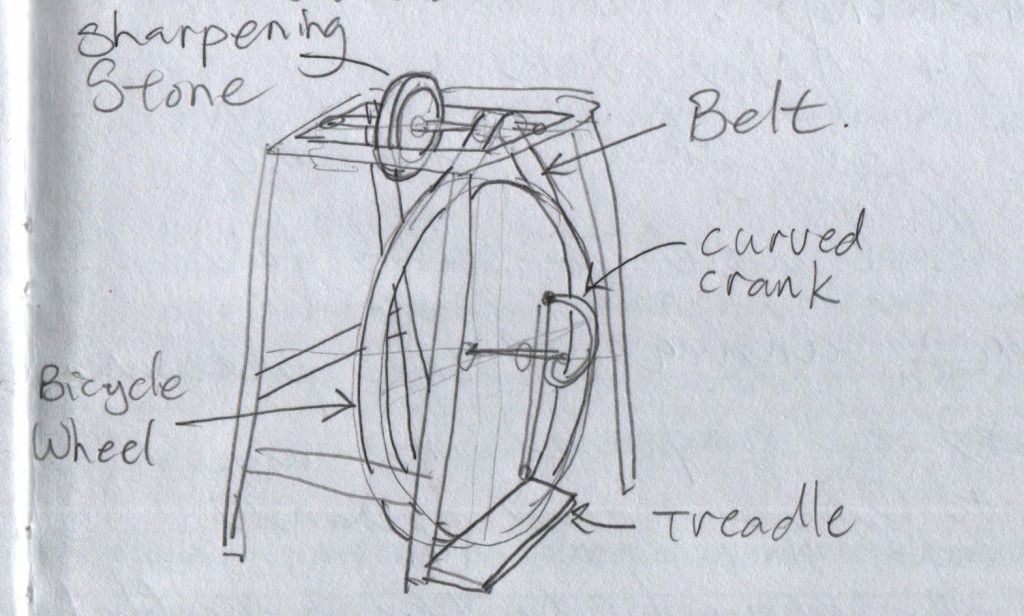 Itinerant knife sharpeners carry these portable grinding wheels. I saw them set up at shopping centres and near a bus depot. In Alappuzha I saw a man carrying such a sharpening wheel on his bicycle, riding through a residential neighborhood, calling out to announce his services. 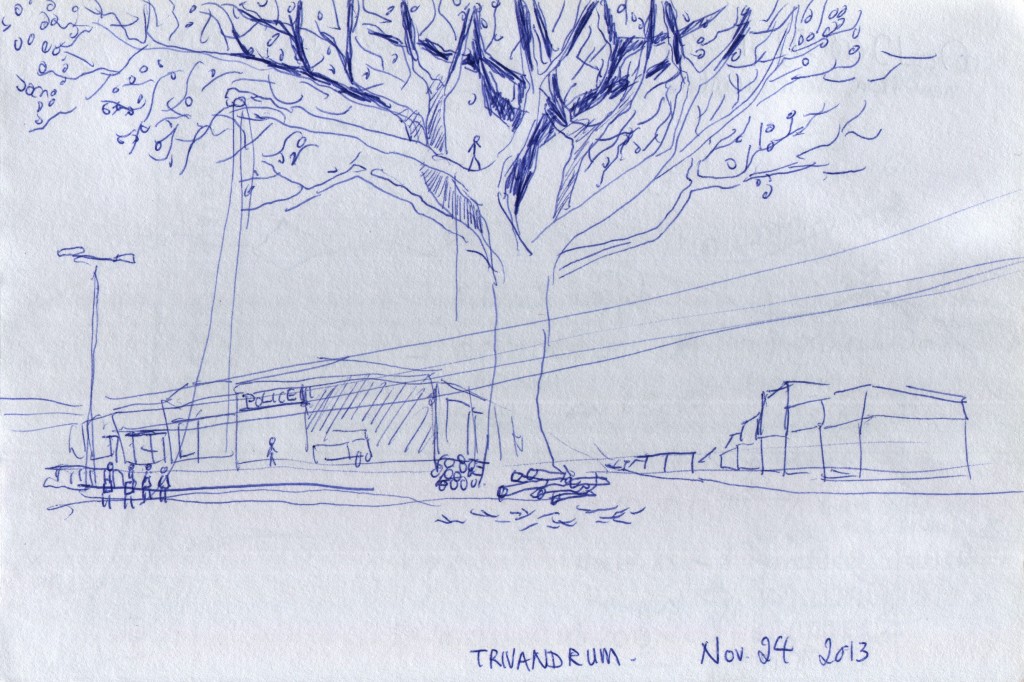 This giant shade tree towers over an intersection in northwest Thiruvananthapuram. A recent storm had damaged some of the branches, and this crew was at work sawing off the damaged limbs. The branches are so big that the man working aloft could walk about on them. His helpers hoisted up a chainsaw. When he had cut through the branch, it fell to the ground with as much impact as a full-sized tree would make. 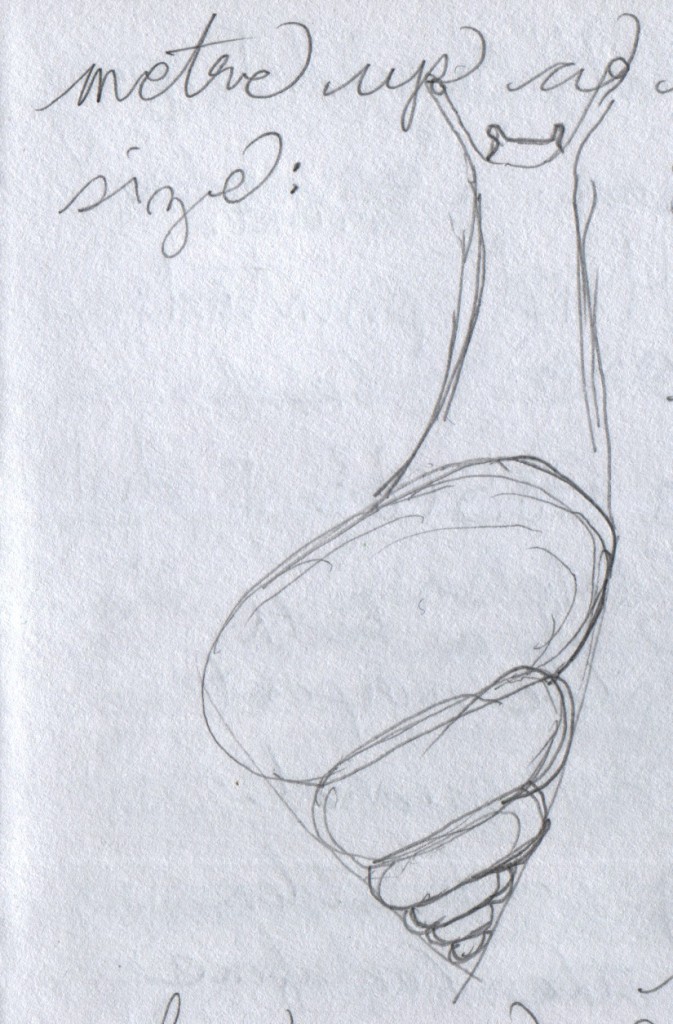 This snail, its shell the size of a chicken’s egg, was crawling up a concrete utility pole on SS Kovil Road in Thiruvananthapuram. 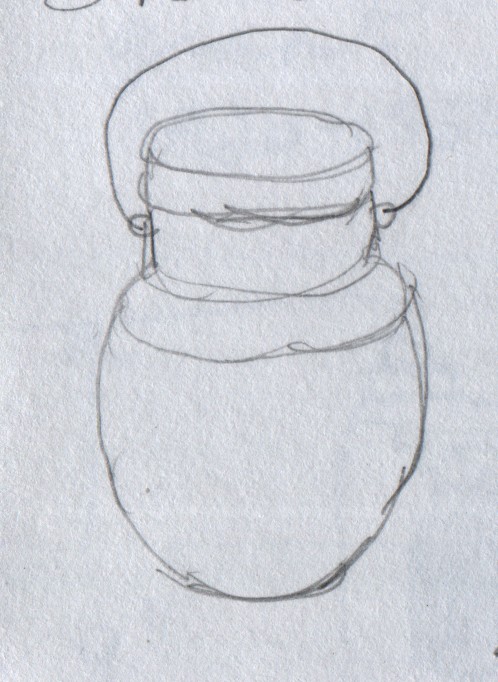 I like the shape of these stainless steel milk containers. I saw them hanging in shops that sell household goods. This one holds about one litre, and other sizes are available.
Though I found the form novel, it seems people throughout the world used it.
Back in Canada, my mother instantly recognized it as a sketch of a milk container. My mother remembered such milk containers from her childhood in Germany in the 1930s, when a man with his horse-drawn cart travelled the streets selling milk. Parents sent their children to the milk cart to have the milkman fill similar containers, which the children carried home. 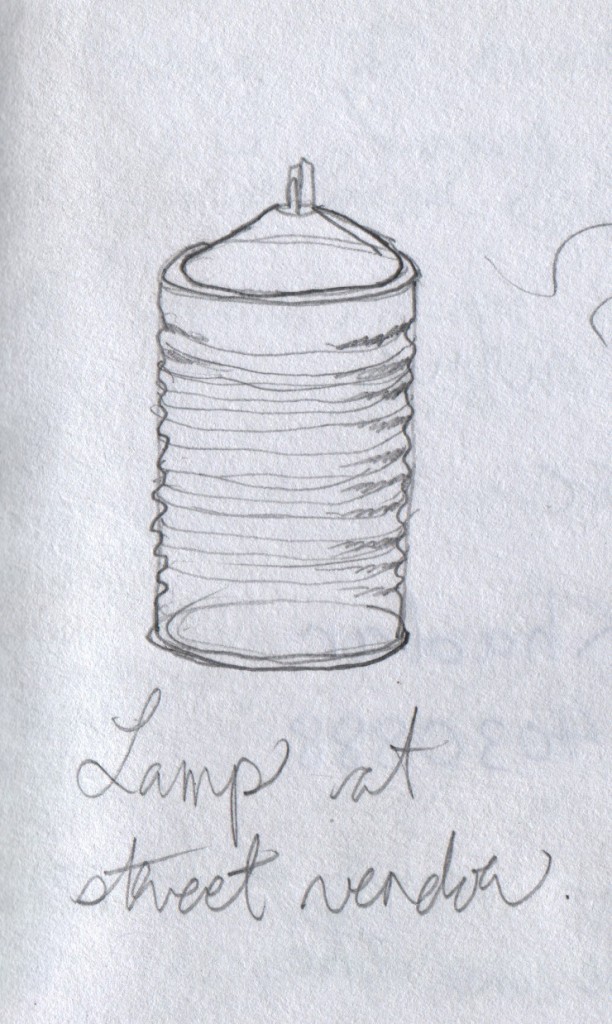 This metal oil lamp illuminated a food-vendor’s stand in Thiruvananthapuram after sunset.
The lamp is made of thin metal with a corrugated pattern impressed in it. I drew this from memory, and I cannot recall whether the corrugations ran horizontally or vertically. 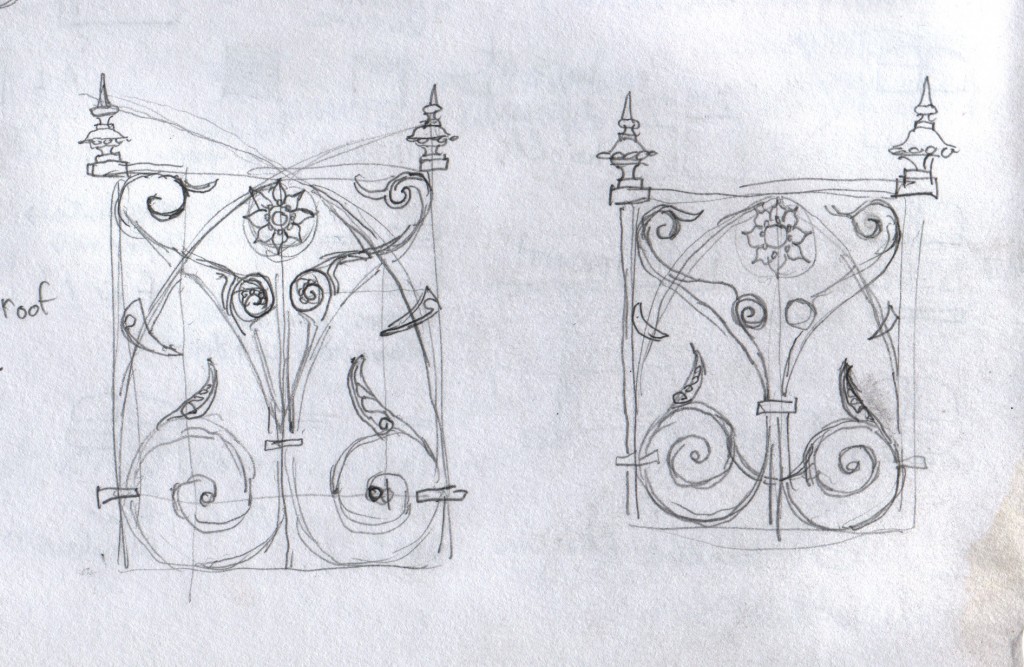 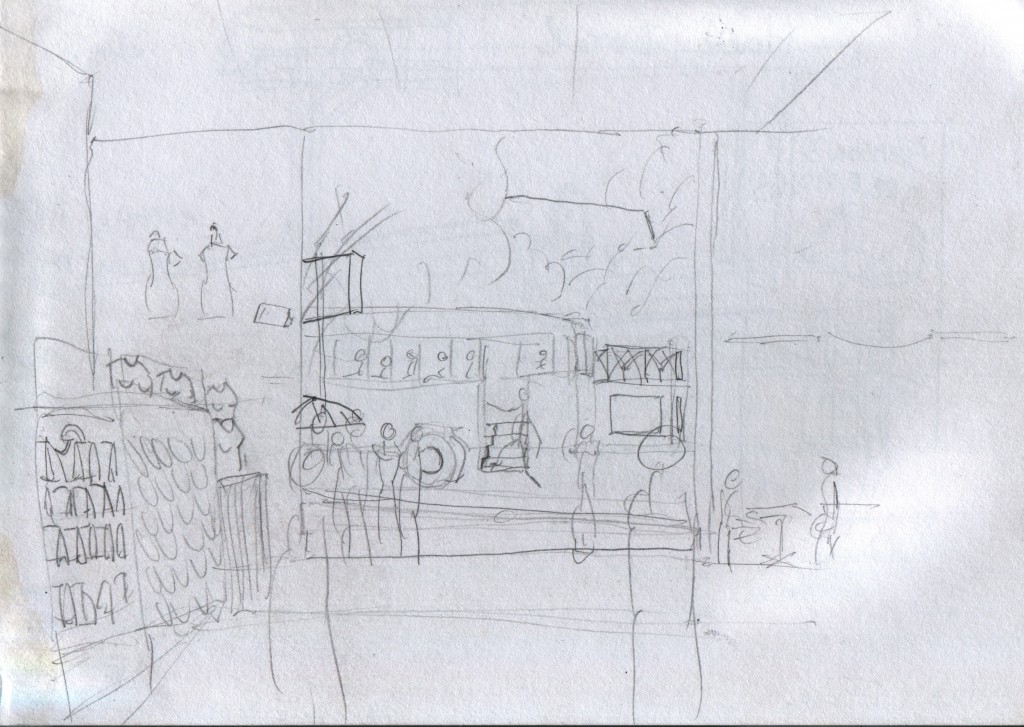 Saphalyam Shopping Complex, Thiruvananthapuram, across from Victoria Jubilee Hall. The shopping complex has a large central courtyard surrounded by tiers of shops on several floors. I bought some art supplies at a shop on one of the upper levels.

In many cases, builders supply house windows with decorative bars that are unique to that house. 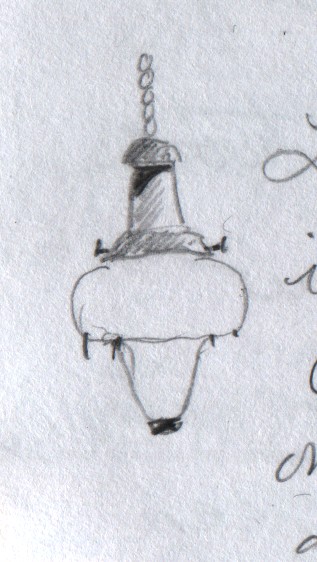 A beautiful antique lamp hangs above the Principal’s desk at the College of Fine Arts, Thiruvananthapuram. 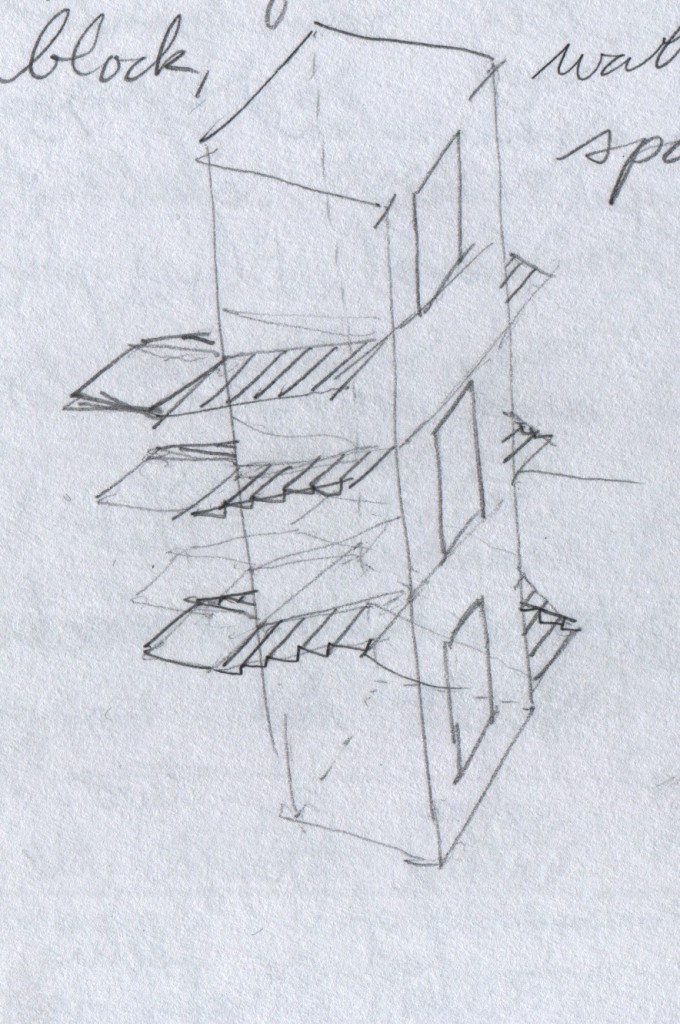 I liked the way the builders wrapped the staircase around the elevator in the hotel. This turned out to be common practice in othe buildings. I do not think that I have seen this done in Vancouver. 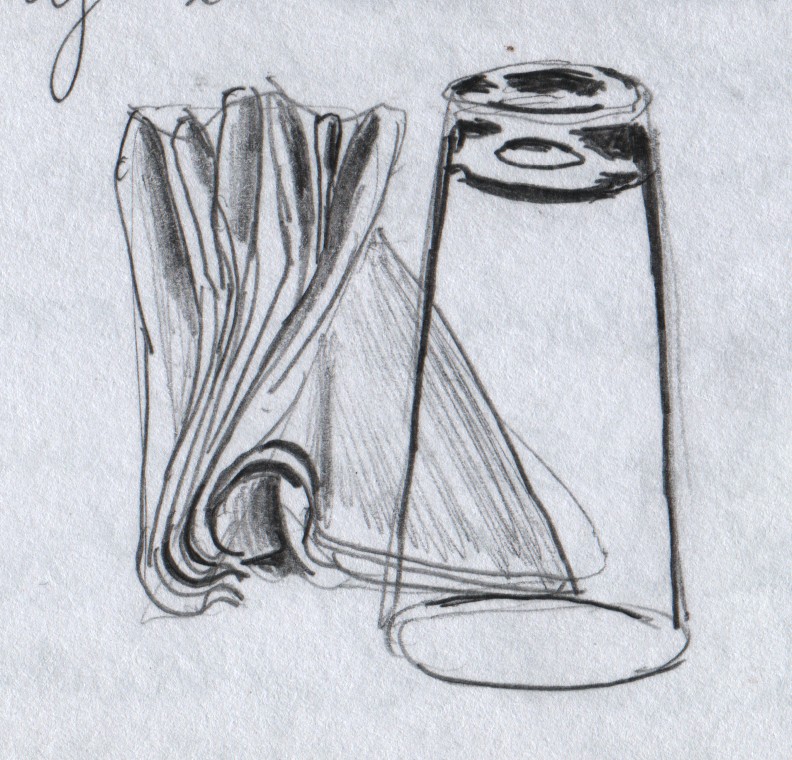 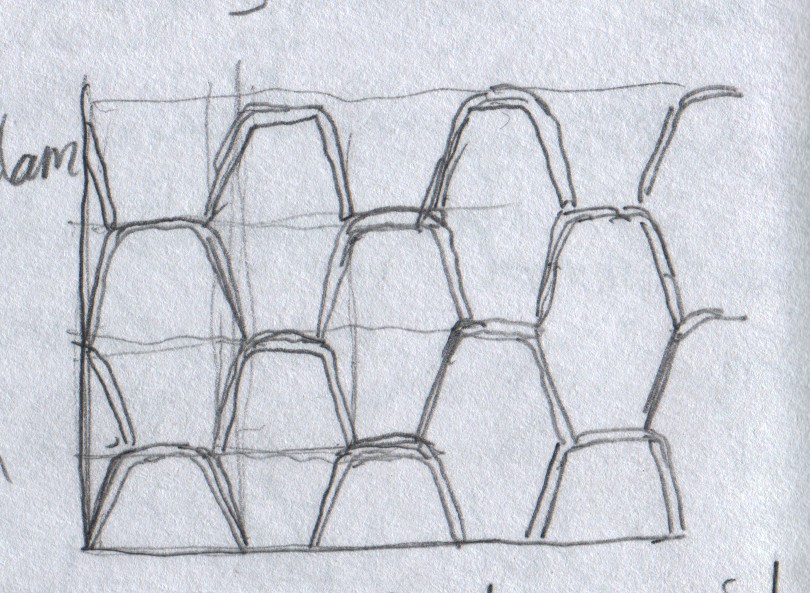 Steel window bars at the hotel where I stayed. Most windows open, and most have some kind of barrier made of wood or steel. May steel window barriers are decorative.