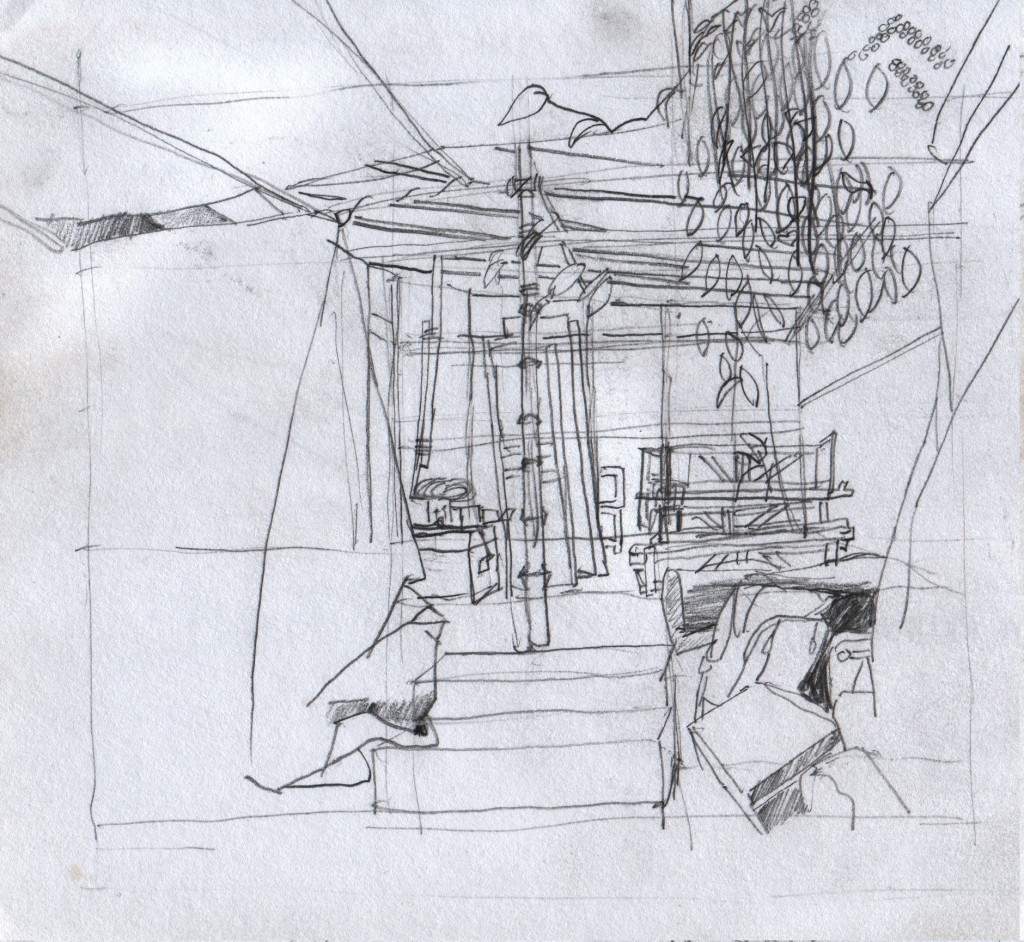 In Irinjalakuda, an actor invited me to travel with his troupe to see the play that they would present on a temple ground in a nearby town. I accepted, and they tied my bicycle on to the back of their bus and I went with them.
This sketch shows the view from the green room into the backstage. The theatre stood on a concrete pad on the temple grounds. The enclosure for the stage was made of tree trunks, bamboo and tarps. The leaves that hang down belong to a pepper vine. We tasted the green pepper corns. The temple is ശ്രീ പാലയ്ക്കൽ ഭഗവതി ക്ഷത്രം, the Sree Palakkal Bhagawathi Kshetram, Kerala. 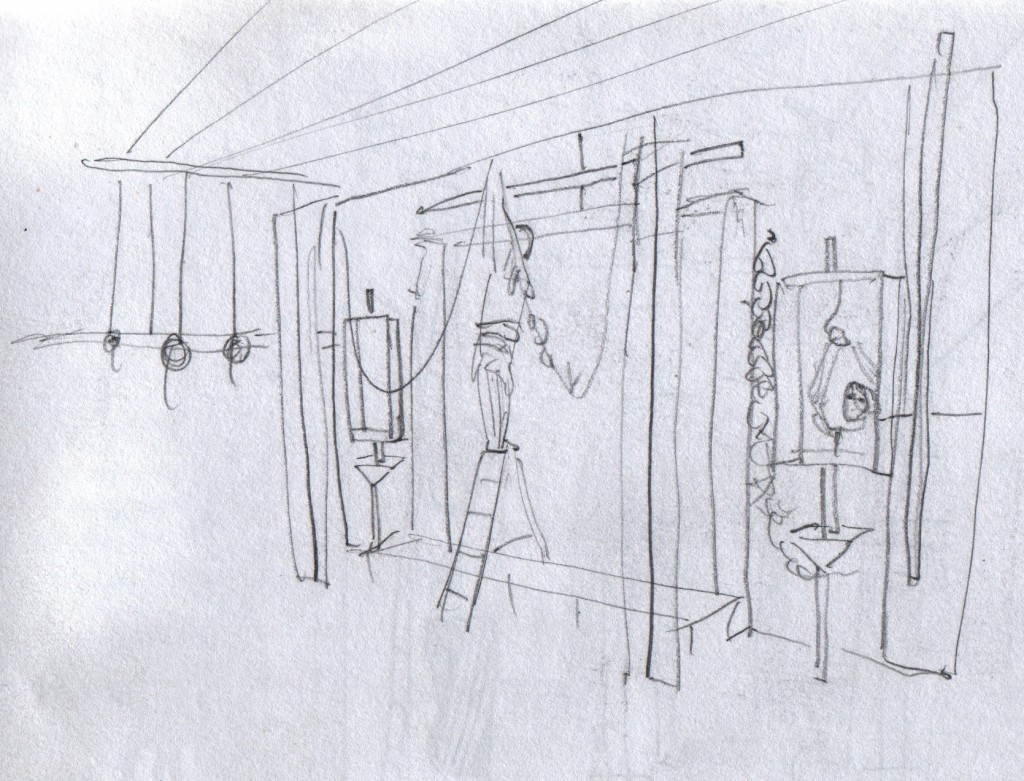 In a few hours, the troupe assembled an intricate set with numerous movable elements.
The drama was വൈശാലി (Vaishali), which told of a forbidden love story during a drought. The tale originates with the Mahabharata. The story became a successful film, and then a writer adapted the film into this play.
Nadham Communications, a travelling theatre troupe, presented the play. 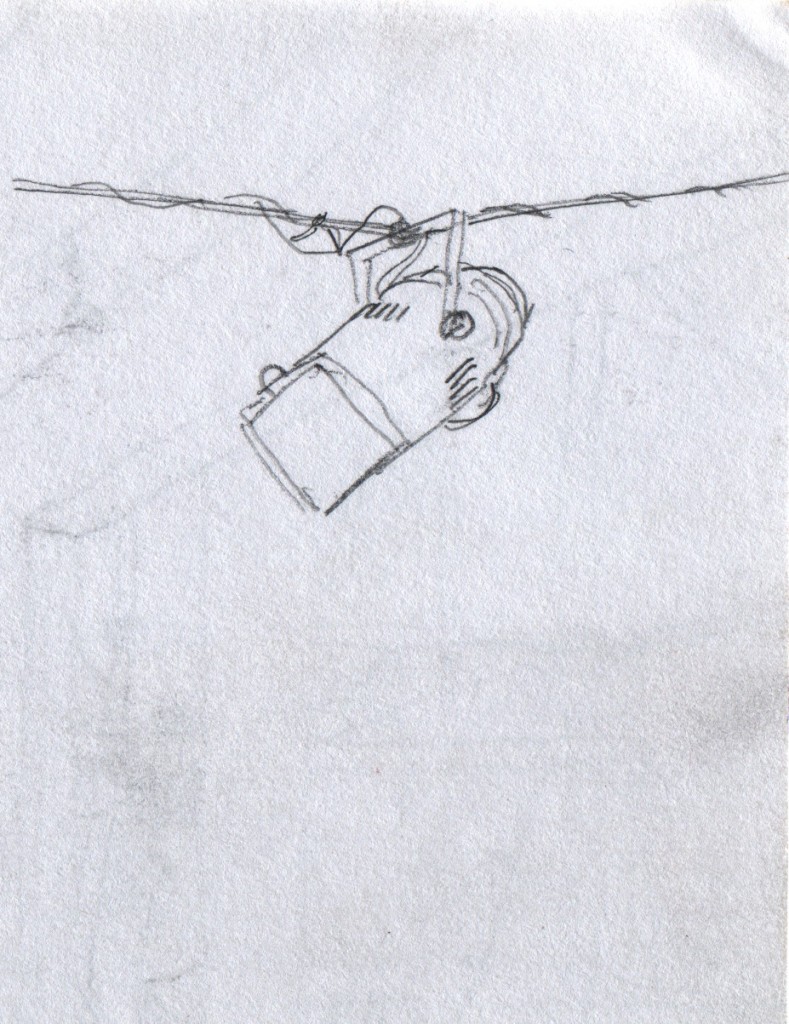 A stage light hangs from a rope on the set of വൈശാലി (Vaishali), a Nadham Communications drama. 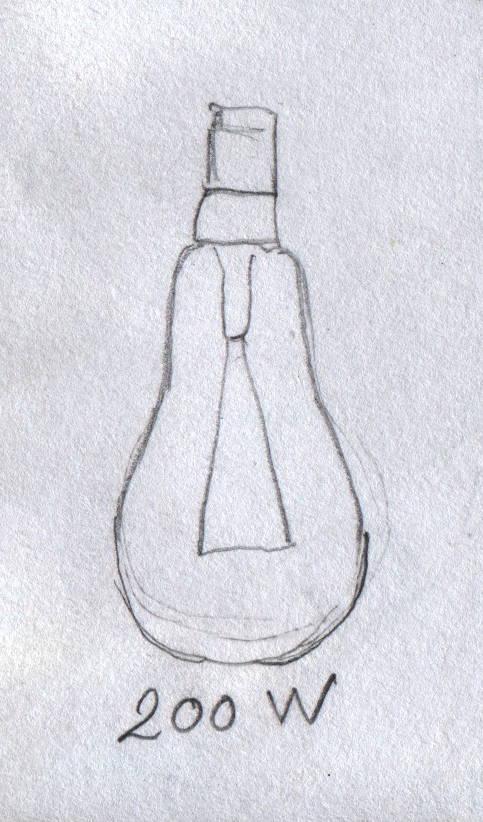 The theatre troupe used a glorious 200 Watt incandescent bulb in the green room. 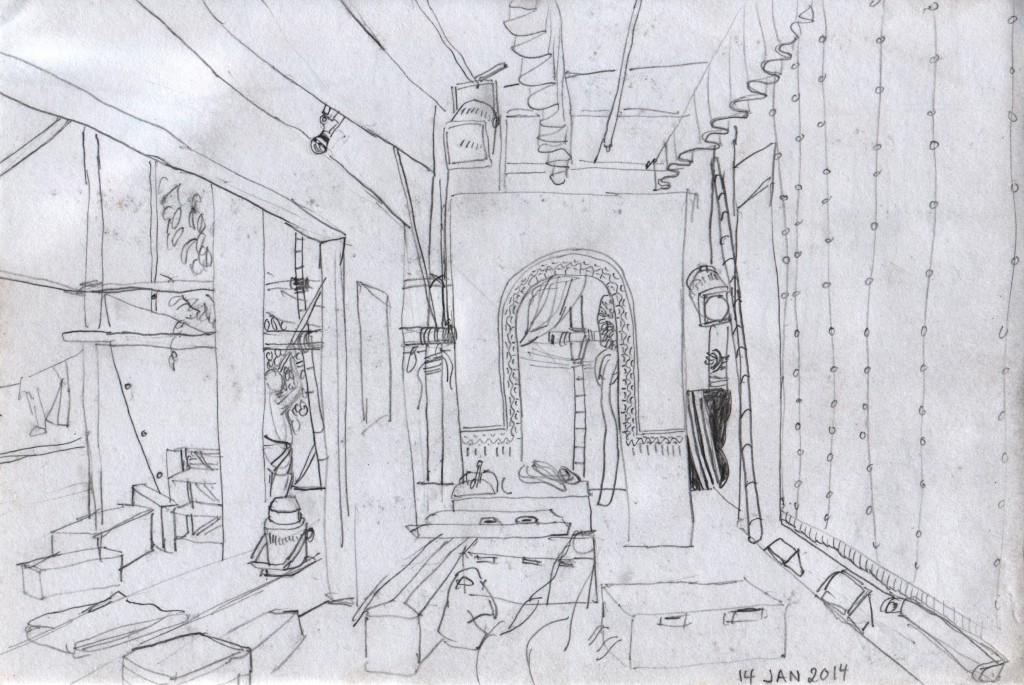 The stage set is well on its way to being complete. The curtain is on the right side of the sketch: The cords for raising the curtain run through the rows of rings on the curtain. 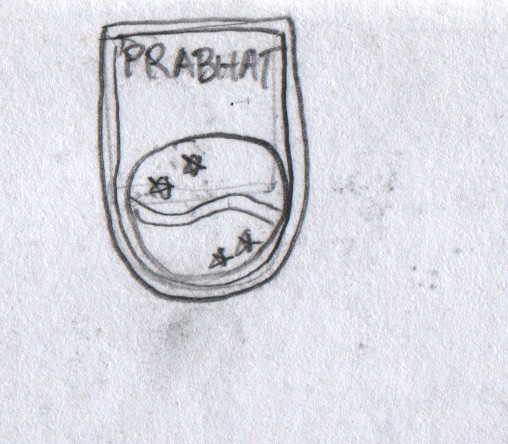 This logo on one piece of Prabhat lighting equipment reminded me of the Phillips logo. 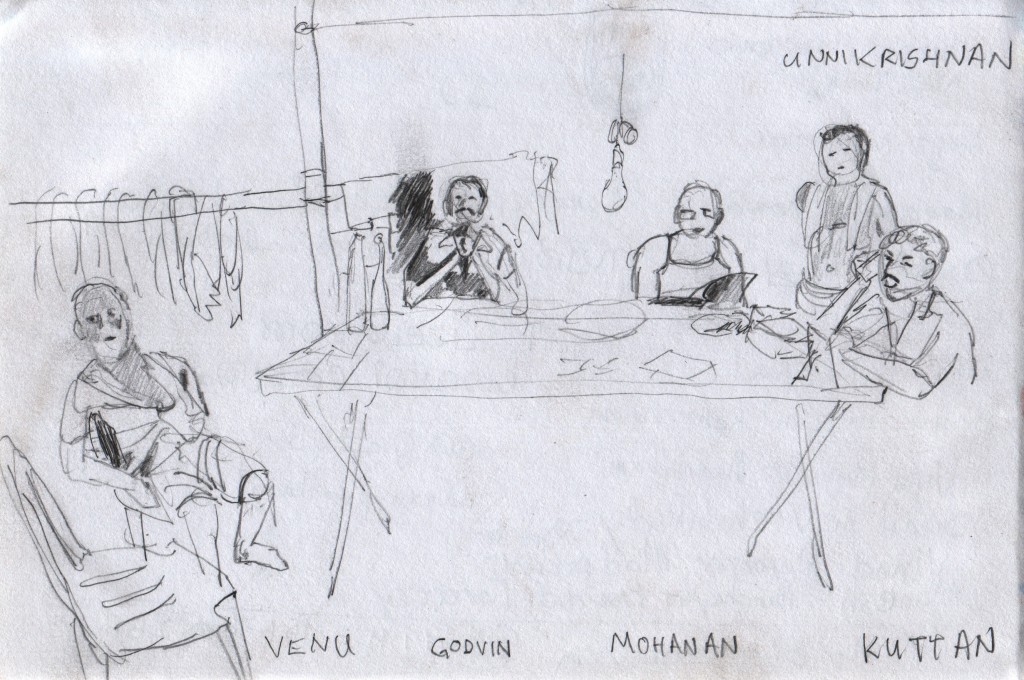 The troupe invited me to join them in the green room. A quiet mood of focus preceded the play, all the actors and technicians going through their pre-performance preparations. 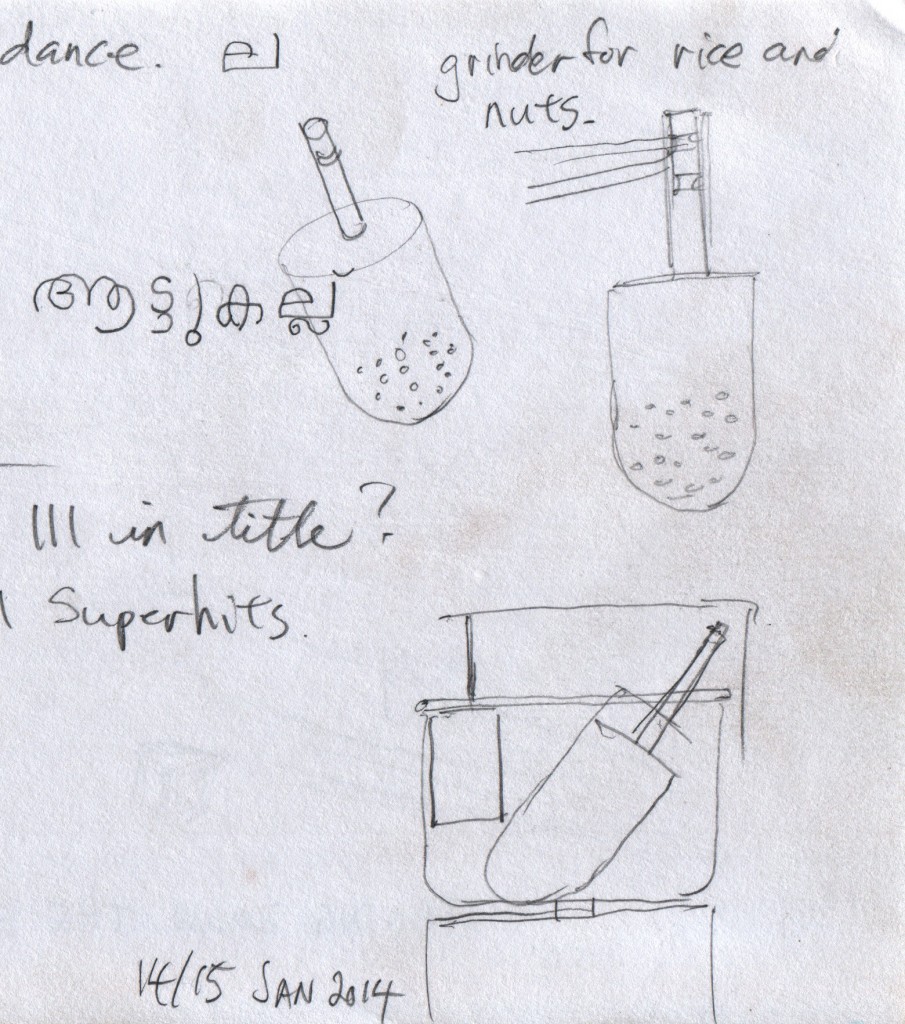 The drama, വൈശാലി (Vaishali), was part of a temple festival that lasted all day. A feast was part of the festival.
I was fascinated by this electrically motorized food grinder. It is known as a wet grinder, or ആട്ടുകല്ല് (aattukall). A heavy stone pestle was tethered to a fixed support, and a stone mortar sat in the bottom of the pot. The spinning pot, powered by a motor, contained the food to be turned into a paste. A fixed spatula scraped the food off the pot’s sidewall and redirected the food into the centre to be ground some more.
I was told that people often grind up chick peas in such a grinder. 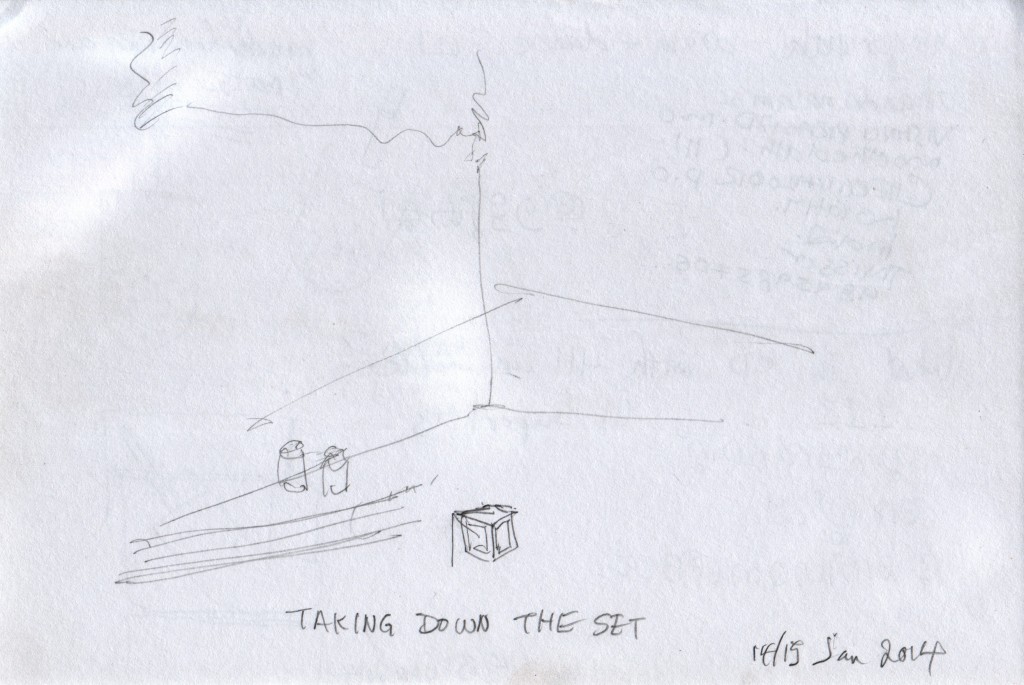 After the performance of വൈശാലി (Vaishali), the theatre troupe quickly disassembled the set and stowed most the pieces on the bus roof, and a few pieces inside the bus. In the early hours after midnight, they were on the road again.
The troupe dropped me off in the nearest large city, and I am most grateful for how they kindly hosted me.